velnes 3886 2018/07/24 21:31 #1029179
Zuokas mano prezidentas!
When you have just the trousers on it’s easy to take them trousers off as well. When you’re naked completely you have to find a shirt and try to put it on again and then you’re dressed normally again.
Citavimas
0

Netikėsim, kol nebus bendros nuotraukos!
Did you see that ludicrous display last night? The thing about Arsenal is, they always try to walk it in!
Citavimas
0

Turkish media reported in March that Gündogan had bought together with his father Irfan and his brother Ilker in the eponymous capital of the province of Balikesir for more than five million euros, an older, extended office building of the city administration. There he plans to build a 13-storey shopping center with 42 shops and 123 offices on an area of ​​around 4,500 square meters. The planning permission has already been granted. On investments, Gündogan is quoted as "pay attention to my father".

Anyone who buys a large building from the state in Turkey and receives approval for a major project such as the construction of a shopping center needs good relations with politics. According to critics, such projects are intertwined with corruption. Never was so much built in Turkey as under the Erdogan government. You can get rich if you do not spoil yourself with him and his party.

A handshake with Erdogan and that he called him "his" president, that may harm Gündogan in the German media. In Turkey, it is conducive to investment. 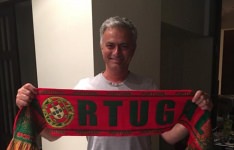 P.S is mano puses irgi baigta.
Arsene Wenger asked me to have a trial with Arsenal when I was 17. I turned it down. Zlatan doesn't do auditions. Zlatan Ibrahimovic
Citavimas
0

Two years after sustaining an injury Arsène Wenger said was ‘the worst I’ve seen’, the Spaniard’s encouraging display against Montpellier showed why Villarreal want to give him a contract

At the end of the game, Santi Cazorla pushed down his bright yellow socks, hitched up the right leg of his shorts and took off his plain black boots, leaving them on the pitch at the picturesque little Stade Saint-Michel in Canet-en-Roussillon, south-east France. He still refuses to hang them up. The equaliser came so late that it never went up on the scoreboard among the trees on the bank behind one goal but although that said 1-0, the visitors had not been beaten and nor has he. The former Arsenal midfielder has not made a competitive appearance since 19 October 2016 but at last there is optimism that he will.
Arsenal’s Santi Cazorla reveals how injury almost led to foot amputation
Read more

After almost two years, 10 operations and a warning that walking round the garden might be all he could aspire to, Cazorla is playing again and he took another step on Wednesday. The 33-year-old departed Arsenal in May, Arsène Wenger having described the injury as “the worst I’ve ever seen” and replying “I hope you’re wrong” when it was suggested the Spaniard might never play again. But Cazorla has now made three pre-season appearances in nine days for La Liga side Villarreal, where he previously played, and they intend to sign him. “I’ll never be able to repay Villarreal everything they’ve done,” he said.

There is still discomfort in the right heel, the stiffness of inactivity making muscles tight too, but it is overwhelmed by playing, at least during the game itself. Last week Cazorla admitted playing even 20 minutes at a reasonable level was “unthinkable”. The night he said so, 636 days after his last appearance, against Ludogorets in the Champions League, he had played half an hour against Hércules – an appropriately named opponent for his return. “It was very special to feel like a footballer again,” he said, and coming back had been some task, his achilles tendon reconstructed, 8cm of it eaten by infection, part of his forearm grafted on to his ankle.

“It’s not a big injury,” Wenger said when he withdrew Cazorla for the last time but the problems multiplied and his Arsenal career ended. The fear existed that his entire career might have done. He continues to fight that and, while this tiny stadium is a fraction of the size of the Emirates, being here meant a lot.

Cazorla spent much of last season living and working alone in Salamanca. After being released by Arsenal, he trained with Alavés’ youth team before Villarreal called. He joined pre-season in Girona and there is caution, of course, but sessions are completed daily, and there is a game almost every three or four days before the league begins next month.

Hércules was the first game, on 17 July. Three days later he was sent on in the 47th minute against Marseille. Here there were another 30 minutes on a patchy, slightly uneven pitch near Perpignan, the team bus pulling up behind a temporary stand on one side at the home of the French fifth-tier side Canet Roussillon. On the other, a small main stand. At one end, fans gather among the trees on the bank. At the other, pink and white rhododendrons run along a wall, a dozen or so people gathered behind the goal, a small tractor turned forklift truck is parked up in the corner.

A big, imposing fence runs round the pitch, like something out of the 1980s, which looks a little out of place in this setting and not entirely necessary either. In total, maybe 400 people come. There is a dog too, standing behind the bench where Cazorla begins the evening giggling his way through the pitch inspection – not good, in truth: dry, uneven and sandy brown in places – and the pre-match kickabout before taking his seat. It is evening but it is hot still.

Advertising boards announce local companies. A small bar sells chips and wine. At kick-off, a couple of fans shout “Montpellier!” and that is about it until there is a gasp of breath and applause for a wonderful touch. Not from Cazorla but Montpellier’s Isaac Mbenza, who also makes the opening goal. Cazorla is still on the bench but at half-time there he is on the pitch, giggling again. At times it is hard to reconcile his relentless happiness, that smile, with how hard it has been. The brutal reality.

The analyst comes over and slots the chip and transmitter into the vest Cazorla is wearing, his every move tracked, and a few minutes later, he joins five others warming up. After 59 minutes, they are introduced. Cazorla does not run on. He is playing on the near side, high up on the left, although of no fixed position. His first pass is a long diagonal, towards the tractor and the feet of Nicola Sansone. His next accelerates everything, the pass turned sharply inside to Samu Castillejo, intent suddenly imposed on the move. Very Cazorla. He might not always move especially fast but at times the ball does and so do the feet. Both of them, of course.

Twenty-five times he gets the ball, at a rough tally. He loses it three times, the passes a little overhit. And speaking of losing it, when Montpellier’s No 9, Giovanni Sio, needlessly hits him – hard too – there is a flash of anger, the hint of a flick of the foot. When it happens again, Sio steaming in once more, a confrontation begins. Castillejo piles in, the first to leap to Cazorla’s defence. Others follow; from the two benches, words are exchanged. Only the man hit stands aside, watching it silently by the touchline. The Montpellier coach, Michel Der Zakarian, holds out an apologetic hand, and also withdraws Sio.

Cazorla looks a bit bemused and momentarily looks at his ankle but he is fine, so he continues. Another evening, more encouragement. Cautious optimism. “Carry on like this, and …” one member of staff says from the back of the stand.

A clever pass gives Karl Toko Ekambi a chance, one on one, which he puts wide. A shot is blocked on the edge of the area and a volley flies over. Then – get this – Cazorla wins a header, which he is still laughing about later. There is a tackle, too. And a foul – a fairly cynical one, in truth, tripping his opponent as he seeks to go round him on the outside.

Time is running out but the equaliser arrives. It would be quite a stretch to say that Cazorla starts it – his pass is simple, sideways and deep near the halfway line, while four more follow before the cross is headed in by Ekambi – but not long ago it would have been a stretch to have even been out there, so it is something. It all is.

At the whistle, Cazorla pulls off his boots, slowly heading towards the tunnel before joining his teammates in a circle on the grass. His captain comes to bump fists. There is a word from the manger, another burst of laughter.

When they stand and make their way, Cazorla stops to pose for photographs with the ball girls, youngsters who play for Canet Roussillon. He gives one his shirt, No 12. Then he signs autographs through the fence. Just doing things footballers do.